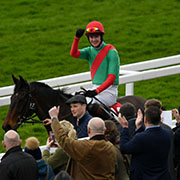 A strong trends race, possibly the strongest of the Cheltenham Festival.

Last-time-out winners had a strong profile winning six times between 2003-2010 but a paucity of last-time-out winners in recent seasons has made it difficult for horses with such a profile to emulate them. Still the 2015, 2018 and 2019 winners also arrived here directly off a win so the market doesn’t give them enough respect.

A quality piece of previous Cheltenham Festival form is a notable positive (11 of the last 23 winners had finished in the first four at this meeting before), six of them 12 months earlier and, better still, that piece of quality form being achieved in a previous running of this staying handicap chase. Last season’s 1-2-3-4 were The Conditional, Kildisart, Discorama and Vinndication. The Conditional was having his first run at the Cheltenham Festival but had won at the course before as had the runner-up and third was finishing placed for the third Cheltenham Festival in succession.

Two years ago Beware The Bear became the latest winner to have run very well in Ultima before having finished fourth in 2018 following two years earlier Un Temps Pour Tout emulating Scot Lane in 1982 and 1983 by winning back-to-back runnings. In addition, the 2014 winner, Holywell, also went close to becoming a dual winner when finishing runner-up in 2016 and Vintage Clouds has placed twice. Remarkably, Un Temps Pour Tout became the fourth winner since 2010 to prep in the Cleeve Hurdle on Festival Trials Day in January.

All change with regards to trends for official ratings. The 14 winners prior to 2014 were rated no higher than 143 heading into the race but five of the following six winners ran off 145+ with two of the last four winners rated in the 150s. Un Temps Pour Tout became the first winner rated in the 150s since fellow dual-race winner, Scot Lane 34 years earlier so it was some effort for Vinndication to finish a close-up fourth off 159 last year.

The 14 winners prior to 2014 were rated no higher than 143 heading into the race but five of the following six winners ran off 145+ with two of the last four winners rated in the 150s.

Jonjo O’Neill has trained three of the last 12 winners of which Wichita Lineman and Alfie Sherrin won in the colours of J P McManus, whose silks were also carried to victory in the 2003 running with the Irish-trained Youlneverwalkalone. O’Neill also went close on three more occasions with second-place finishes for Keen Leader, Carbury Cross and Holywell since 2002 so this is clearly a handicap that he likes to target.

Nicky Henderson had to wait 19 years for his first winner in this handicap since Marlborough when Beware The Bear won in 2019 but two winners and seven places from 26 runners since the start of the century is consistent going. Alan King is another trainer who likes to target this race. His record of two winners and a close-up third since 2003 catches the eye and Bensalem also looked the probable winner nine years ago but for his late fall. Take special note if King runs a novice. David Pipe loves the Festival handicap chases and has also won this race on three occasions. In addition to two wins for Un Temps Pour, he won with An Accordion as well The Package placing on three occasions before he won the Fulke Walwyn Kim Muir. Paul Nicholls, however, is 0-22.

As for the Irish, they supplied the second and third six years ago in a race they haven’t really gone after in a big way down the years and have not won since Dun Doire in 2006 and only had one other winner in the 41 years that preceded that success. Discorama was a close-up third last season faring best of those held up off the pace.

What was once a mighty difficult race for novices who went 37 years without a winner up until Fork Lightning won in 2004, has been turned on its head having registered six successes in the last 17 runnings.

As for horses aged over ten, give them a wide berth as just two have placed from 52 to try since 1997.

Positives
Won or placed at the Cheltenham Festival in another year (notably in this race)
Novices
Won last time out
Trained by Jonjo O’Neill, David Pipe, Alan King or Nicky Henderson
Owned by J P McManus
Prepped in the Cleeve Hurdle