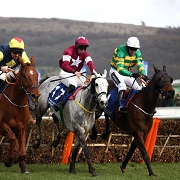 Eleven of the last 25 winners also won on their previous outing which is a very high strike rate for a Cheltenham Festival handicap hurdle so that is the key opening trend.

The class acts have been coming to the fore recently as Sire Du Berlais won off top eight last season (beating the third-top weight into second - pair well clear) following up his victory off 11st 9lb in the previous season’s running, Presenting Percy led home a 1-2-3 for horses in the top six in the weights in 2017 and the previous year the second, third and fourth could be found in the top five in the handicap. Moreover, in 2014 the top weight beat the second top weight into second and, for good measure, the third and fourth in the handicap finished fourth and fifth.

The last five winners have been trained in Ireland so the Leopardstown and Punchestown qualifiers have been the key races of late. In fact, it was a third win on the spin and a second 1-2 in three years for Gordon Elliott when Sire Du Berlais led home The Storyteller last season. In addition, Elliott also saddled the third and fifth in 2018. Irish-based trainers were responsible for the 1-2-3-5 last season.

Eleven of the last 25 winners also won on their previous outing which is a very high strike rate for a Cheltenham Festival handicap hurdle.

Sire Du Berlais, failed to finish in the first six of the Leopardstown qualifier in which The Storyteller was last season’s eye catcher so he was sent to Warwick where, in placing fourth, he did all that was required to book his ticket back to the final. The previous season, he occupied the sixth and final qualifying position at Leopardstown so six of the last 16 winners of the final ran in that race with five qualifying via that route. Three of the last five winners qualified at Punchestown in February finishing 313.

The most successful British qualifier has been the very first in the series as the Cheltenham Qualifier back in October has featured three of the last 17 winners. Not that they featured heavily though in their qualifier as they were beaten out of sight finishing 887 so wouldn’t have even qualified on that basis for this season. Do note however that only two winners of any qualifier have gone on to also win the final in the last 25 runnings.

Staying in Britain and outside of the qualifiers, or even including the qualifiers, comfortably the best guide of late has been the Betfair Exchange Handicap Hurdle (formerly the Fixed Brush Handicap Hurdle) at Haydock on Betfair Chase day with three of the last 12 winners of the final finishing in the first five.

Jonjo O’Neill has won the final on four occasions, two of which for J P McManus who also won it with Kadoun and Sire Du Berlais (x2) for other stables. Paul Nicholls has yet to win the final but he could not have gone any closer than when Southfield Theatre was edged out by a nose six years ago and he supplied the runner-up again the following season and the third at a big price in 2018. Seven of his 17 runners have finished between second and fifth so he has been there or thereabouts.

Novices can win this staying handicap, seven of them have done so going to back to Danny Connors in 1991 though none for eight years until Mall Dini four years ago. Only Pragada and Delta Work have won for five-year-olds since it was first run in 1974.

What was a strong race for grizzled, tough, hardened handicappers has gone back to favouring younger horses again like between 1983-1997 when all bar two winners were aged no older than seven. Horses aged 8+ won on as many as nine occasions between 1998-2012 but five of the last six winners were younger. The recent anomaly was Sire du Berlais winning as a eight-year-old last season and also becoming the highest rated winner by as much as 4lb for many a moon when successful off 152.

Negatives
Winner of a qualifier