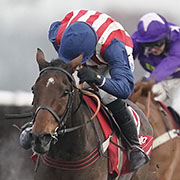 The last two winners were sent off at 12/1 so did not appear in the first four in the betting unlike 27 of the previous 33 runnings, but not far off, so it remains a case of concentrating on the leading hopes.

The race formerly known as the Hennessy had very much been a strong handicap for trends followers, and then came along the 10-year-old, Sizing Tennessee, in 2018 to win by 10 lengths becoming the first winner since Diamond Edge in 1981 to win aged in double figures! Prior to then we had to go back to Rondetto in 1967. Thankfully, normal service resumed last season when De Rasher Counter brought home the bacon as a pretty-well-fancied, second-season chaser leading home a 1-2-3 for seven-year-olds. This was the fourteenth time in the last 21 years that a second-season chaser came out on top.

An angle that has come to the fore more recently is the importance of a prep race which didn’t used to be the case but the last seven winners were all given an outing to prepare for Newbury. After Smad Place won, Alan King commented that getting a prep into him was crucial as the previous year he was also well fancied on his seasonal debut but found it tough without a run to harden him up for such a competitive handicap. More contenders will prep than won’t so it’s more of an angle for putting a line through a few.

The Badger Ales Trophy at Wincanton was as good trial when Coome Hill and Teeton Mill both won that prize before their victories (and Kings Road was only beaten a short-head before he took top honours at Newbury) but it has not been a factor since 2000. Of the last six winners, the four that contested a chase in their prep won whereas the two that prepped over hurdles were beaten.

This has become far more of a class-act’s race recently and the last 15 winners were officially rated 145+, nine of which carried a minimum of 11st 3lb

In victory two years ago Sizing Tennessee was giving Colin Tizzard a second Ladbrokes Trophy winner after Native River and his Elegant Approach has finished second and third for the last two years for good measure taking the stable’s record in the last seven years to a very impressive two wins, two seconds and two thirds. His Reynoldstown (and also course) winner and second-season chaser, Copperhead, looks an obvious candidate for the stable this season that trail Nicky Henderson and Paul Nicholls by one winner. David Pipe is also worth noting having trained a winner and four placed horses from his 13 runners.

The Willie Mullins-trained Total Recall justified favouritism in 2018 giving the Irish their first winner since 1980, though his Be My Royal passed the post in front but lost the race months later due to an illegal substance found in his sample. Given that his Kemboy ended the season as the top rated chaser in Britain and Ireland in 2018/19, I have to think that he would have taken some beating off 157 had he not been withdrawn after being declared due to travel problems so look out for Mullins’s entries.

Ben Jones committed early on De Rasher Counter moving upsides seven fences out and taking over four out on a guaranteed stayer. Sizing Tennessee was given a similar ride to win in 2018 and the previous two winners had made virtually all. In fact, it has now been 15 years back to Celestial Gold since a horse who was given what can be called a proper, creeping hold-up ride won. It’s very much a rhythm race and, as such, not easy to make up plenty of ground on the second circuit.

Newbury form is also a positive and De Rasher Counter became the ninth winner in the last 13 runnings to have won at the course before.

A handicap in which horses carrying no more than 11st dominated between 1985-2004 with only one winner (Suny Bay) carrying more than 11st, the second most prestigious handicap chase of the season behind the Grand National has become far more of a class-act’s race recently and the last 15 winners were officially rated 145+, nine of which carried a minimum of 11st 3lb. To further underline this notable u-turn, the top weight or joint top weight has placed at worst eight times in the last 14 years (Denman twice defied top weight). Another class stat to bear in mind is that 14 of last 20 winners had registered a victory over fences at pattern or listed level (including 10 of the last 13), five of which had won a Grade 1 race over hurdles.

Two of the last seven runnings went on to feature that season’s Gold Cup winner (Bobs Worth 1st and Lord Windermere 8th) and both of those subsequent Gold Cup winners had won the previous season’s RSA Chase. The RSA Chase in which Champ made the most of the Irish duo of Minella Indo and Allaho taking each other on from too far out, is usually a very good place to start. The 2010 Newbury 1-2, Diamond Harry and Burton Port, also both contested the RSA Chase earlier in their year and the 2005 and 2007 RSA Chase winners, Trabolgan and Denman, both added this race to their C.V. later in the year as did the aforementioned Bobs Worth. The 2008, 2009, 2017 and 2018 Ladbrokes Trophy runners-up also contested the RSA Chase the previous spring.

Another novice chase to note from the previous season is the Grade 1 Kauto Star Novices’ Chase at Kempton on Boxing Day won by Slate House beating Black Op and Danny Whizzbang as four of the last 15 Ladbrokes Trophy winners contested that prize 11 months earlier. During the late 1980s through to 2001 it was the Mildmay Novices’ Chase at the Grand National Meeting that was the second-best guide behind the RSA Chase with five winners but it had not featured the winner for a decade until Many Clouds put that right six years ago and then Native River made it two wins in three years. Sadly, there was no Grand National Meeting last season of course.

Positives
Second-season chasers (especially if contested the RSA or Kauto Star)
The first four in the betting
Course winners
Trained by Paul Nicholls, Nicky Henderson, David Pipe or Colin Tizzard
A Grade 1 winner over hurdles
Won over fences in prep race (don’t be put off by a defeat in a prep race over hurdles)