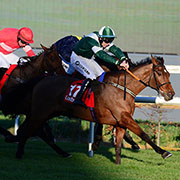 Formerly run in early January but moved to be part of the Dublin Racing Festival when that was introduced three years ago, for me Ireland’s premier handicap hurdle now gets a bit lost in amongst a plethora of Grade 1 races.  Those of a certain vintage will remember Persian War, Comedy Of Errors, Night Nurse and For Auction all winning as did the future Cheltenham Gold Cup winner, Captain Christy, and the dual Champion Chaser, Barnbrook Again but it is now restricted to horses rated 0-150 (raised from a 0-145 seven years ago).

The winning run of novices had dried up since their fine run between 1992-2002 when How’s The Boss, Anusha, Dance Beat, Grinkov and Adamant Approach gave them five victories but the J P McManus-owned pair of Gilgamboa and Off You Go have given them two more recent successes. Henry Higgins is the only winner this century to have had raced more than ten times over hurdles underlining the strong ‘potential to improve’ profile required for this handicap.

Twelve of the last 20 winners were winning their first handicap hurdle when successful here but only one of the last 14 winners had not contested a handicap before. The domination of second-season hurdlers would account for that as, remarkably, up until Abbey Lane won eight years ago during his third campaign over timber, the previous 13 winners had all been second-season hurdlers whether they officially carried novice status or otherwise.

All but one of the last 22 winners was sent off between 5/1-20/1 and for the third year running it was Charles Byrnes who saddled the winner when Thosedaysaregone emulated the dual winner, Off You Go, by landing an on-the-day gamble. If returning to the race, he will be attempting to join his stablemate, Comedy Of Errors, Fredcoteri and Redundant Pal as a dual winner. Byrnes also won this prize with Dromlease Express in 2004. It is fair to say that Byrnes has taken over the mantle of ‘the man with the plan’ in this race from Arthur Moore who won it on six occasions between 1979-1998.

Twelve of the last 20 winners were winning their first handicap hurdle when successful here but only one of the last 14 winners had not contested a handicap before.

When Off You Go won this handicap for the second time he was leading home a 1-2-3 for J P McManus and was fourth winner in the last seven years (two of which were novices) adding to Gilgamboa and Henry Higgins.

Eglantine du Seuil fared best of Willie Mullins’s contenders last season in fourth adding another placed effort for the stable after supplying the runner-up and fourth in 2018. Mullins has got to grips with this handicap in a big way of late saddling the 2013 winner, the 1-2 in 2011, the 2-3-4 in 2010 in addition to winning with Adamant Approach in 2002. Two of Mullins’s three winners contested the Grade A Handicap Hurdle over 2m Fairyhouse in early December, as did Off You Go last season before winning here on his next start.

Tony Martin supplied the second and third four years ago following two more placed runners in 2014 taking his tally to eight placed horses in addition to Xenophon’s victory since 2003. Jessica Harrington has taken three runnings (two of which contested the Paddy Power Handicap Hurdle at Leopardstown over Christmas where they both finished second) so is clearly another trainer to note and she also trained Modem and Jezki to finish second. The last British-trained winner was the Jenny Pitman-trained Master Tribe in 1987 but this is no longer a race they attack with any great verve.

It has been important to arrive here off the back of a good recent start as up until Final Approach nine years ago, the previous ten winners had been placed at worst in their last race as have five of the nine subsequent winners, two of which advertised their claims by finishing second in a two-mile handicap at the course on his previous start at the Leopardstown Christmas Meeting – a race in which the 2016 winner, Ice Cold Soul, finished back in twelfth. That four-day meeting has featured five of the last 15 winners.

Archive Footage won with 11st 8lb on his back in 1999 but that was a very rare success for those at the higher end of the handicap as just two other winners in the last 27 years have carried over 11st). In fact, last season’s 1-2-3 carried no more than 10st, the 2018 winner sneaked in as the bottom weight of 29 runners carrying 9st 10lb, 18 of the last 19 winners have carried no more than 10st 11lb and horses carrying over 11st since Archive Footage are 1/65. I usually prefer to go with to official ratings trends over weight-carried trends but this statistic is so strong it seems sensible to stick to it.

Only one penalised horse in the last 21 years has finished placed from 28 to try and many of which, coming off a recent victory of course, were very well fancied. The last penalised winner was Hansel Rag in 1985.