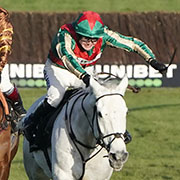 A very good handicap for punters as 28 of the last 34 winners could be found in the first four in the betting, though surprisingly given that stat, just one favourite has won since 1996.

Like so many of Cheltenham’s leading handicap chases, previous win-or-placed form at the course has been an important factor. Only the Irish-trained Go Roger Go and Niceonefrankie in a race that fell apart from half-way have bucked this trend since 1992 so make your first port of call a horse that has proven it can handle Cheltenham's undulations.

Not unsurprisingly given that this valuable handicap attracts many of the principals that contested the BetVictor Gold Cup being run over the same track (albeit this time on the New Course) over a trip only half a furlong longer in distance, three horses (Pegwell Bay, Senor El Betrutti and Exotic Dancer) have completed the double in the same season. Five other horses have won both races but in different seasons since 1983.

A very good handicap for punters as 28 of the last 34 winners could be found in the first four in the betting, though surprisingly given that stat, just one favourite has won since 1996.

Continuing with this theme, seven of the last 15 winners posted a top-five finish in the BetVictor Gold Cup, the latest being Warthog last season who went two places better than the previous month. Do not restrict yourself to a top-five finisher though as the 2016 and 2017 winners, Frodon and Guitar Pete, could only finish tenth and ninth respectively before winning here. It should be stated though that the 2017 BetVictor Gold Cup runner-up, Starchitect, was all set up to romp home here before breaking down fatally when galloping towards the final fence when in a clear lead.

When Frodon won the race for a second time emulating Poquelin who won a brace of Caspian Caviar’s for Paul Nicholls who also took the 2012 running with Unioniste which brought the trainer’s record to five winners. As with the BetVictor Gold Cup, the major southern yards have proven very hard to beat here winning 17 of the last 20 renewals. Nicky Henderson has taken the prize three times, all with second-season chasers.

Younger horses have dominated of late (a 1-2-4 for 7yos last season), in fact there has been no winner aged over eight since 1993 and novices have won three of the last eight runnings via Unioniste, Double Ross and Frodon, two of which were Paul Nicholls-trained, French-bred four-year-olds. There has been no winner aged ten or more since 1974 and only two have made the frame in over 20 years so they can confidently be overlooked.

French-breds have a tremendous record in chase races up to and including 2m5f at the Cheltenham Festival (notably the Plate which is the equivalent race at that meeting) and it doesn’t end there as they have won 11 of the last 18 runnings of this 2m5f handicap chase.