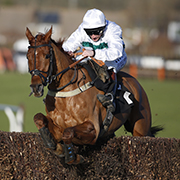 Last season’s carnage-strewn renewal in which only six of the 18 runners completed was won by the seven-year-old Baron Alco who had some quality course form to his name beforehand (notably second to the subsequent multiple winner Road to Respect in the Plate) so he wasn’t becoming the 21st winner in the last 27 years that had won at Cheltenham before.

Nineteen of last 21 winners who had recorded a success at Prestbury Park before had won here over 2½ miles or further. The 2010, 2011, 2014 and 2018 winners were winning at Cheltenham for the first time in their careers which takes some gloss of this statistic being in the last decade but there can be no doubt that a strong piece of course form is a big positive. Fifteen of the last 20 winners ran in a chase at the previous season’s Cheltenham Festival (excluding the Foot-and-Mouth abandoned year).

When Al Ferof won seven years ago off a handicap mark of as big as 159, he became the highest-rated winner heading into the race for 17 years (Dublin Flyer won off 163 in 1995). Prior to his victory in 2012, four of the previous five winners were rated between 146-148 - the exception being Imperial Commander who ran off 139. Frodon was second off 161 last season before winning the Ryanair, as did Imperial Commander, but interestingly six of the last 12 winners were officially rated between the narrow ratings band of 146-148 including Baron Alco last season.

Six of the last 12 winners were officially rated between the narrow ratings band of 146-148 including Baron Alco last season.

Martin Pipe trained eight winners and his son, David, got on the board with Great Endeavour and supplied the 2017 narrow runner-up, Starchitect. Nigel Twiston-Davies gears his stable up for this three-day meeting and has won three of the last 11 runnings in addition to Tipping Tim’s success in 1992 but also note Jonjo O’Neill who has won three of the last 13 renewals and Johns Spirit was narrowly denied four years ago off top weight on testing ground.

Alan King had four placed runners from his previous ten runners until Annacotty landed him the spoils four years ago and although Philip Hobbs may have only saddled one winner (Joint Sovereignty in 1989), six of his last 15 runners have placed, three at double-figure prices. Paul Nicholls got the monkey off his back seven years ago having previously been 0-23 including three seconds though Granit Jack looked all set to do just that until falling fatally in 2007, and Caid du Berlais gave him a second victory four years ago. It was his Frodon off top weight who finished runner-up last season.

Irish-based raiders had to wait 30 years for their next BetVictor Gold Cup winner after Bright Highway won back in 1980 when Tranquil Sea justified favouritism nine seasons ago and the North have landed just one renewal since 1983 with L’Antartique so it has been the southern-based stables and notably the powerful southern-based stables that have been very difficult to beat.

Four of the first five home were aged no older than seven last season so it was a return to the domination of the younger, up-and-coming brigade. Prior to Baron Alco’s success on good ground, a very testing underfoot surface making it a greater test of stamina and experience had played into the favour of older horses ground for the previous two years. When Taquin du Seuil won in 2016, he became the first winner in 14 years not to be a second or third-season chaser and in doing so led home a 1-2-3 for nine-year-olds which certainly went against the grain as young horses usually dominate the race. No horse aged ten or older has won since 1975 and that none have even placed since the former Champion Hurdler, Beech Road in 1993 until Ballyalton finished fourth in 2017. Prior to two winners on testing ground in 2016 and 2017, all bar one of the previous dozen winners had run less than ten times over fences as had Baron Alco last season.

Sent off the 8/1 fourth-favourite, Baron Alco became the 36th winner from the last 47 runnings that could be found in the first four in the betting, so it has generally been a handicap to concentrate on the leading fancies, and he was yet another winner for a leading southern-based stable.

Eight of the last 17 winners were having their seasonal debut including all three of Jonjo O’Neill’s winners. Of the seven most recent winners to have run earlier in the campaign, three had contested the Colin Parker Memorial Intermediate Chase at Carlisle where they finished 211.