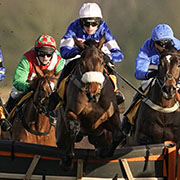 Eight of the last 11 winners were novices, three of which were trained by Nigel Twiston-Davies, so expect them dominate the front end of the market again. Of that octet, six had only run three times over timber beforehand. In fact, only two novices were declared four years ago and Ballyandy and Movewiththetimes fought out the finish some 6l clear of their rivals. Two of those successful novices plus the 2016, 2017 and 2020 runners-up were owned by J P McManus so especially look out for a first-season contender racing in his silks and his two winners then went on to finish second in the Supreme Novices’ Hurdle.

The last 14 winners have been aged five or six (Pic D’Orhy’s success last season meant that both of Paul Nicholls’s winners were French-imported five-year-olds) and, since Europe’s most valuable handicap hurdle was first established back in 1963 where it took place at Aintree, just three horses have won aged older than seven so very much concentrate your thoughts on the up-and-coming brigade. The overall performance of five-year-olds since the mid-nineties has been particularly eye-catching being responsible for better than half of all win-and-place positions (35-69) going back to and including 1995 which is some achievement given they are at a considerable numerical disadvantage. Five-year-olds supplied the 1-2 last season, filled five of the first six places in 2016 after being responsible for five of the first seven places in 2014.

The overall performance of five-year-olds since the mid-nineties has been particularly eye-catching being responsible for better than half of all win-and-place positions (35-69).

As for individual race guides, note the two-mile handicap hurdle run at Sandown on the Tingle Creek Chase card which has featured six of the last 24 winners with Make A Stand (another winning novice) and Spirit Leader completing the double. Another race to respect is the two-mile handicap hurdle at Cheltenham two weeks prior to this contest as both Landing Light and Copeland won that contest in successive years just after the turn of the century before following up here and Heathcote was also unplaced in that same Class B 0-145 handicap before he won here 14 days later at 50/1.

The Gerry Feilden over the same course and distance almost two months earlier has also been a fair guide of late. As for the Irish, the Ladbrokes Hurdle had been a notable guide as five of the last 22 winners finished in the first half-dozen at Leopardstown the previous month. However, that race now takes place just a week before so is unlikely to be as important a guide and enhances the prospects of the winner staying at home rather than being exported to Ireland.

Essex in 2005 is the only Irish-trained winner since 1976. Willie Mullins has been having a crack but only two of his 18 runners have placed, the latest being Ceil de Neige finishing second last season.

Gary Moore is a dab hand at preparing horses for valuable two-mile handicap hurdles with the Betfair Hurdle likely to be at the top of his hit list. Heathcote (2007), Wingman (2008) and Violet Dancer (2014) have taken this prize for the West Sussex-based trainer so his entries deserve the highest respect. Those three were winners were also the Betfair Hurdle’s only winners officially rated under 134 in more recent times. Nicky Henderson remains the main man however, winning this event on five occasions since 1998 and his Punjabi was also runner-up in 2008 despite top weight.

With regards to weight, in addition to Punjabi, Rooster Booster also carried top weight into second place but just Persian War has carried over 11st 7lb to victory in the race’s history until Al Dancer two years ago. However, that was very much a weakened race switching to Ascot a week after Newbury was abandoned offering far less prize money and attracting just a 14-runner field as a consequence. The fact that Persian War, Rooster Booster and Punjabi were all Champion Hurdlers tells us how hard it is to carry a big weight in this race in a normal renewal. The two previous winners successful off 11st 7lb were both trained by Martin Pipe.

As for the quality of a contender’s previous run, only one of the last 19 winners failed to finish in the first six on their most recent outing and, although we have had two shock winners 50/1 and 33/1 in the not-so-distant past, it has generally paid to look to the fancied horses as 12 of the last 19 winners could be found in the top five in the betting.