Last Season's Winner: Not So Sleepy 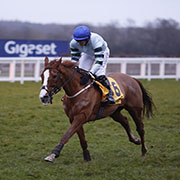 First run at Ascot in 2001, three surprise winners is to be expected given how competitive this handicap is and Thesis (33/1), Desert Air (25/1) and Cause Of Causes (25/1) were hard to predict but all the other winners were all findable with seven starting in the first three in the betting. In fact, the 1-2-3-4 in 2017 were all priced in single figures despite it being a 17-runner handicap and three of the first four in the betting filled three of the first four home last season.

Nicky Henderson’s Brain Power lead home a Seven Barrows 1-2 four years ago giving the stable a fourth winner since 2002 following Chauvinist, Jack The Giant and Sentry Duty. For good measure Henderson also won the 2007 replacement race run at Sandown with Papini (though a less valuable and competitive prize so not a replica) after Ascot was abandoned and has had numerous other horses placed.

Willow’s Saviour provided Dan Skelton’s first major success as a trainer in this race in 2013 and he has since been the trainer to follow in the major 2m handicap hurdles in Britain. Two seasons ago Mohaayed gave Skelton his second victory in this race. Also note Philip Hobbs who has twice supplied the runner-up before Sternrubin dead-heated for first five years ago.

Paul Nicholls has a fine record in the equivalent race at Ascot run earlier in the season but he has yet to win the race from 22 contenders, six of which placed. The record of the Irish reads two winners (both trained by Gordon Elliott who also supplied the third in 2013) and six placed horses from their 40 runners to date.

Twelve of the last 17 winners were second-season hurdlers if including both dead-heat winners in 2015. Novices took three consecutive runnings between 2012-2015 and the 2002 winner, Chauvinist, was also a novice but he is also the joint-oldest winner to date as a seven-year-old. Last season’s winner, Not So Sleepy, was also seven and an experienced stayer on the flat but he was only having his fifth race over hurdles. There have been 41 unsuccessful horses aged 8+.

Four of the last 18 winners (Marble Arch, Chauvinist, Raya Star and Sternrubin) had their previous start at Newbury’s Winter Festival. In terms of one particular race, three winners ran in the Class 3 handicap hurdle at Cheltenham over 2m1f the previous week and ran very well too as Jack The Giant won both races in 2007, Thesis finished third in that same handicap at Prestbury Park before winning here eight days later and Desert Air was second in that same event. Cause of Causes also had his previous start in a handicap hurdle at Cheltenham having finished third in the Greatwood Hurdle.

Positives
First and second-season hurdlers
Trained by Nicky Henderson, Dan Skelton, Gordon Elliott or Philip Hobbs
Contested a handicap hurdle at Cheltenham earlier in the season (notably the 2m1f handicap hurdle the previous week)
Ran at the Newbury Winter Festival
The first three in the betting