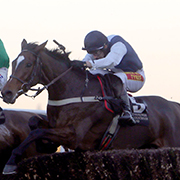 With 17 of the last 26 winners of the Becher Chase going the way of a horse in the first five in the betting, this race designed as a stepping stone to the Grand National has been a pretty good race for the market leaders.

First run in 1992 and run over a circuit-and-a-half of the Grand National course, it is now a far better spectacle than during the 1990s when the field sizes were disappointing. The race has had some effect on the big one itself later in the season notably in 2003 when the 1-2 went on to fill the same positions with Amberleigh House reversing placings with Clan Royal. One For Arthur also gained some valuable course experience three seasons ago when finishing fifth ahead of winning the Grand National two starts later.

Previous Aintree form must still be hugely respected as nine of the last ten winners had run over the Grand National Course before.

The winner for the last two years, Walk In The Mill, fared best of the Brits in the 2019 Grand National when fourth behind Tiger Roll but sadly he couldn’t attempt to improve on that effort last season due to Covid-19. However, Grand National experience has been a much greater guide to the Becher Chase than the other way round as over half of the last 23 winners (12) took their chance in the Aintree extravaganza back in the spring which unfortunately is an irrelevance this season.

Previous Aintree form must still be hugely respected though as nine of the last ten winners had run over the Grand National Course before. In fact, when Walk In The Mill won in 2018 he beat previous course winners into second and third. Since 1997, only six winners were having their first experience of these unique fences in any race run over these obstacles and three of those were trained by Paul Nicholls. Outside of Aintree form, four of the last 15 British-trained winners ran in the previous season’s Haydock Grand National Trial.

Blaklion was giving Nigel Twiston-Davies a remarkable sixth win in the Becher Chase three years ago (and his Baby Run almost made it seven when only beaten a length into second place as a teenager), two winners ahead of Paul Nicholls who has also saddled four runners-up. The Irish have won three of the last 15 renewals and all three contested both the previous season’s Paddy Power Chase at Leopardstown and the Troytown Chase, two of which also ran in the Irish National and Pat Taaffe Chase.

As far as weight carried is concerned, some would argue that conventional logic says chuck out anything carrying over 11st given this is a stern test of stamina on testing ground (nine of the last 12 runnings have taken place on soft or heavy ground) but four of the last 13 winners carried 11st 5lb+ so the classier horses can give the weight away and three other winners since 1995 carried top weight. More interesting is official ratings that determine what weight horses will carry as the 18 winners up until the 153-rated Blaklion were rated no higher than 148 and seven of the last ten winners were rated no higher than 137.

Since the inception of the Becher Chase, horses aged in double figures trail 17-11 but they have been significantly lesser represented than horses aged nine or under and it was a 13-year-old in Oscar Time who was successful six years ago. Even a 14-year-old in the Nigel Twiston-Davies trained Hello Bud won seven years ago and a 13-year-old for the same stable finished a brave second the following season.